I noticed that in home assistant several of my 10 ecodim dimmers (ECO-DIM.07) have the wrong state compared to the reality. In home assistant and in phoscon the state of the lamp is ‘on’, but in reality the lamp is off. This occurs for several dimmers but not always. Based on the history in HA it looks like the lamp is turn off by the dimmer, but almost directly (after 1sec always) is turned on (only in the state in HA and phoscon, not in reality). Later, when the light is turn on again the state does not change because it is already wrongly indicated as being on. Is this a known issue?

See the image for one dimmer with two times (red circle) this issue. 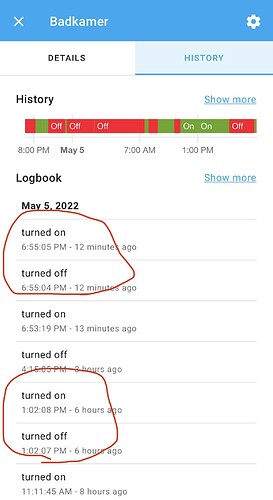