I’ve got a GLEDOPTO GL-C-007 that I’m using to make some LED strips talk to my Conbee2. The lights seem to connect fine but after some time seem to disconnect / become zombie and just stop working at that point.

The Conbee2 and GLEDOPTO are < 2 meters away with only a doorway separating them so I can’t see connectivity being an issue (I also have a motion sensor sat next to it that stays connected without issue.)

Is it just a case of the device not being fully supported by deCONZ and I need to look at zigbee2mqtt instead? I’m fairly new to HA / deCONZ in general and just trying to set up a simple if motion turn lights on (which is working fine when connected)

Logs from deCONZ at the point where things start to disconnect. 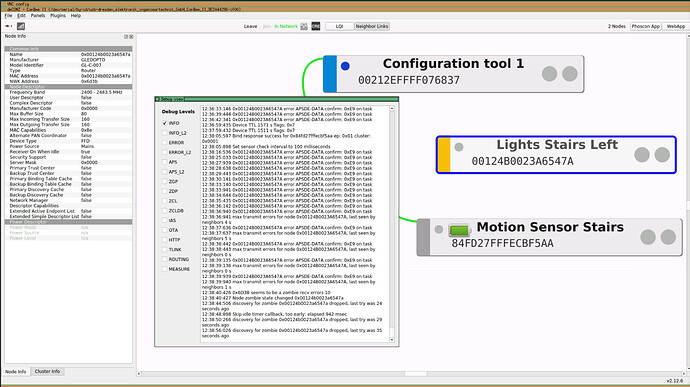 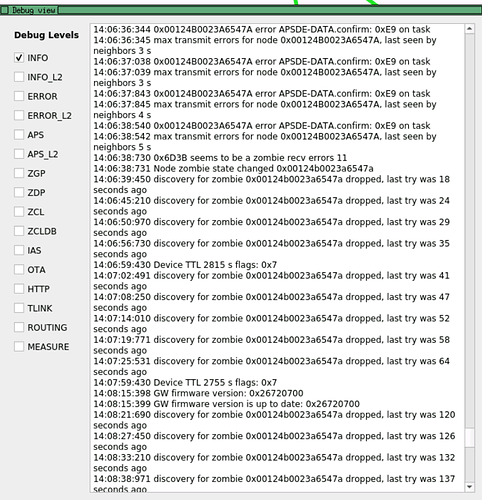 It does eventually seem to reconnect but obviously has been off / my automations won’t work during the disconnected period.

Bumping to see if anyone has any advice here?

Ah I forgot to reply.

Can you provide some logs in pastebin based on APS, aps2, error, error 2, info and info2?

I have a similar issue using several Gledopto GL-C-008. These are pretty neat RGB+CCT LED PWM drivers (5 channels) which support 12-24DC and can carry quite some current. I use them to power both LED strips and LED panels.

What I found is that the problem only occurs on Gledopto devices running firmware v3.0.0.

The ones still running v2.0.2 and v2.0.4 work without any issues. However, the devices that use firmware v3.0.0 disconnect from my ZigBee network at intermittent intervals. This usually occurs once within about 24 hours.

I have to powercycle the devices to get them back, which is quite annoying.

Apparently, this only happens in combination with deCONZ (Conbee II in my case). A friend of mine uses the same Gledopto’s (also some with v3.0.0) with Philips Hue bridge without issues.

Unfortunately it is not possible to downgrade the firmware on the Gledopto devices. As a workaround, the company importing Gledopto has offered to replace the devices with ones running the v2.0.2 firmware which is not causing the disconnects.

Still I am unsure who is at fault here - Gledopto client or deCONZ controller.

Is there any way I can help diagnose the issue on deCONZ side? Log levels to be increased, logs to be provided, tests to be performed? I would be happy to help.